Samsung Galaxy S4 Red Aurora has exclusive available on AT&T. New colors for the Galaxy S4 family has been announced in the official press statement which was released by AT&T. In the online store they have 3 colors available for the Samsung Galaxy S4 I9505, the Black Mist, White Frost and the new color Red Aurora.

There are no price differences between the Samsung Galaxy S4 Red Aurora an the other two color options. As you probably know, if you agree on a two-year contract with AT&T you will be able to pick-up the handset for a mere $199.99, but if you are not the commitment type you can also purchase it for $639.99. 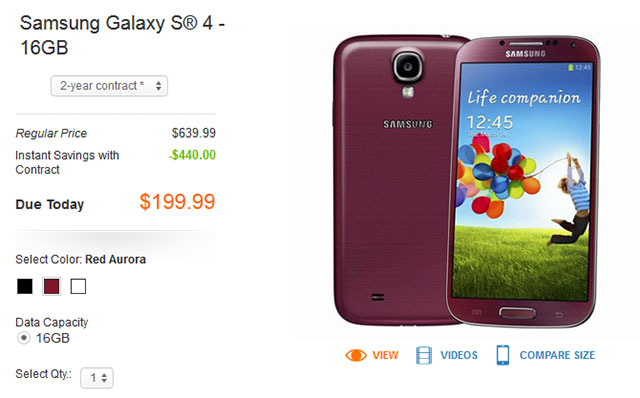 The Samsung Galaxy S4 I9505 describes as Life Companion, inspired by people of the world, is slimmer and stronger than its predecessor. It models a 7.9mm thin and lightweight uni-body construction featuring a 5.0-inch Super AMOLED Full HD display having a pixel density of 441ppi. Samsung’s latest version of TouchWiz user interface is offered as well.

The handset sports a 13.0 Megapixel rear AF camera with 1080p movie recording capability in addition to Drama Shot mode for capturing more than 100 shots in only 4 seconds. Preloaded camera apps include Photo Eraser which creates a composite to remove background people and unnecessary objects from your photos and Story Album, an automatic album creating function.

If you intend to buy this smartphone with a different color of belonging to your friends, you can choose the Samsung Galaxy S4 Red Aurora is available on AT&T.