Samsung Galaxy S4 Has Officially Released and Available on April


Samsung Galaxy S4 has officially released by Samsung Electronics on March, 14 at New York, US. The Galaxy S4 has a 4.99″ Super AMOLED screen with a resolution of 1920 x 1080 pixels, which adds up to a pixel density of 441ppi. The screen still a new PenTile matrix, though it probably won’t matter much at this kind of density.

The international version of Samsung Galaxy S4 powered by  Exynos 5 Octa chipset, which features four Cortex-A15 cores clocked at 1.6GHz, four Cortex-A7 cores running at 1.2GHz and the PowerVR SGX 544MP3 GPU. There will be a second version for some markets, which will be powered by the Qualcomm Snapdragon 600 chipset with its 4 Krait 300 cores and Adreno 320 GPU. Both versions will offer LTE connectivity and 2GB of RAM. 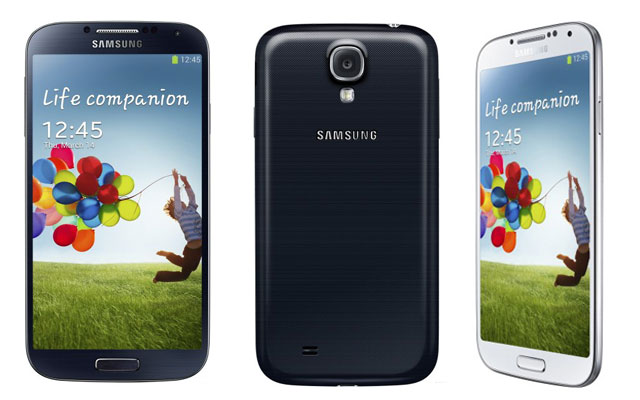 Samsung Galaxy S4 will feature a 13 MP sharpshooter in the back, while on the front a 2.1MP camera will take care of video chats and a host of new features that involve eye-tracking and hand-tracking.

The new Samsung flagship will have three options for its internal storage (16GB, 32GB and 64GB) and they will all feature a microSD card for further expansion.

Samsung has included S Translator, which works with email and ChatON. It can translate all major languages at launch with further ones coming later on.

Smart Pause pauses the video you’re watching if it detects that your eyes are away from the screen, while Smart Scroll can scroll a web page if you tilt the device while looking at it.

Health and Wellness is part of the Samsung Galaxy S4 improved TouchWiz package too. The S Health app can measure steps, calories and even the confort of your surroundings – temperature, humidity, etc. These features require the S Band and Heart Rate monitor accessories.

The Samsung Galaxy S4 will become available from the end of April at over 300 carriers in more than 150 countries. Initially it will be out in two colors, White Frost and Black Mist, but more colors are set to follow later this year.

In the US, all of the big four carriers (AT&T, Verizon, T-Mobile, and Sprint) will sell the Galaxy S4, and alongside them US Cellular and Cricket will have it too. The pricing not yet confirmed.