Samsung Galaxy S4 LTE+ (LTE Advance) to be selling now at europe. Quote a press release for Sweden, the Samsung Galaxy S4 LTE+ will be available as soon as possible to the countries in Europe. There isn’t any costs details offered, actually not any retailer in Europe seems to have still officially announced that it’ll bring the actual upgraded device however it showed up in the official Samsung Germany site. The specifications page lists the 2.3GHz quad-core chipset and LTE Cat 4 and everything. 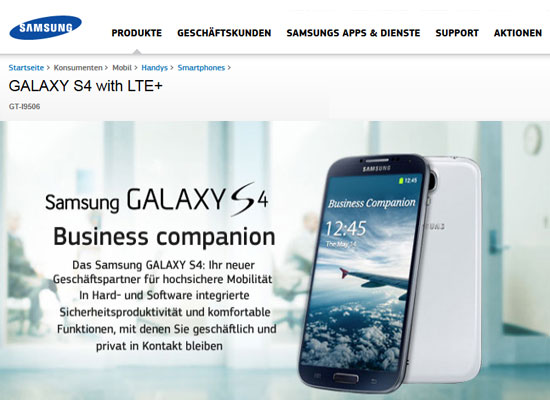 The Samsung Galaxy S4 LTE+ (LTE-Advance) is powered by Snapdragon 800 and was first sell in Korea through SK-Telecom. This device has been able to run the latest 4G LTE called LTE-A network, which is 10 times faster than the old 3G network service. With the use of the LTE-Advanced network, an 800MB file takes some 40 seconds to download, compared with 80 seconds with the existing LTE.

As for color options, only the White Frost / Black Mist are listed with a note saying there might be more color options available depending on the market. The older I9500 / I9505 duo has the following additional colors: Aurora Red (AT&T only), Arctic Blue, Purple Mirage, Brown Autumn, Pink Twilight.