Samsung Galaxy S4 LTE-A has been officially launched (here the unboxing). This new device codenamed SHV-E330S, the newcomer can be obtained for SK Telecom in Korea. It’s the first device, Able to network reaching speeds as high as 150Mbps completely around the carrier’s new LTE-A network. SK Telecom is the first mobile operator in the world to launch the so-called LTE-Advanced network service, which is 10 times faster than the old 3G network service. With the use of the LTE-Advanced network, an 800 megabyte file takes some 40 seconds to download, compared with 80 seconds with the existing LTE. SK Telecom said its LTE-Advanced service is based on carrier aggregation technology, which bundles two frequency bands to increase bandwidth. The network automatically chooses one of several frequency bands available based on data traffic at the user’s location.

Obtainable in Blue Arctic and Red Aurora color, the Samsung Galaxy S4 LTE-A features exactly the same design with the I9500. Measures from the LTE-A are 136.6 × 69.8 × 7.9 mm, while the weight tips the size at 131 grams Body a lot more than the worldwide version. 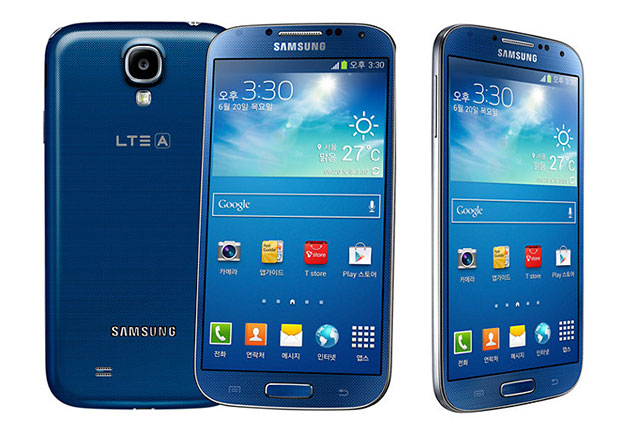 The main difference between the Galaxy S4 LTE-A and the Galaxy S4 I9500 is the presence of a more powerful Qualcomm Snapdragon 800 SoC under the hood. The rest of the specs are familiar – they include 5″ 1080p Super AMOLED display, 13MP camera, 32GB of built-in memory, microSD card slot, and IR port.

Expectedly, the Samsung Galaxy S4 LTE-A will be priced higher than sibling. There no information on the handset’s availability for more markets or carriers for the time being.

Samsung has added two new colors for its Galaxy S4 LTE-A that is sold in South Korea. The phone will now sell in Black Mist and White Frost color options, in addition to Arctic Blue and Aurora Red. Just like the original Galaxy S4, Samsung added new colors for its fastest Galaxy S4 phone to offer consumers more options.

As we know, Galaxy S4 LTE-A runs on 2.3GHz quad-core Snapdragon 800 CPU and supports LTE advanced for data speed of up to 150Mbps.