And now, AT&T has updated the Samsung Galaxy S4 pre-order page and there is a new shipping date – April 23. The previous versions had a shipping date of April 30 for the phone, which put it a week past T-Mobile (April 24) and Sprint (April 27). The price remains the same at $639 or $199 with a new agreement for the 16GB model. 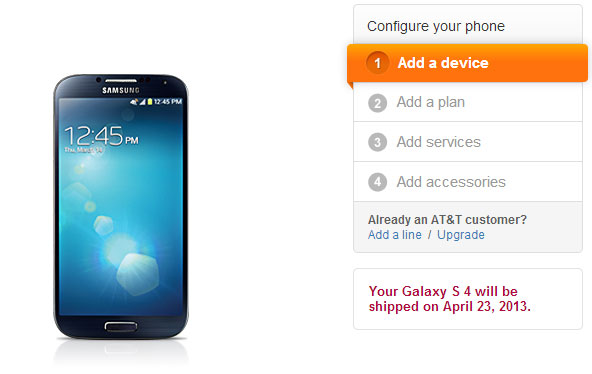 I remind you that the Samsung Galaxy S4 sports a 5-inch full HD display with Super AMOLED technology, while being powered by a quad-core Snapdragon 600 chipset with 1.9 GHz Krait cores and Adreno 320 GPU, plus 2 GB of RAM, and microSD card slot. The smartphone has all the connectivity features of a modern smartphone like 4G LTE, WiFi in all standards, NFC, infrared port, and Bluetooth 4.0.