Samsung Galaxy S4 Google Edition has been announched and will be available on June 26th. The phone will be free of TouchWiz modifications. It will be selling directly through Google Play and it will enjoy timely Android updates just like all Nexus devices. Best of all, it will have an unlocked bootloader for that extra flexibility.

Actually though this Samsung’s consider of Galaxy S4 will work on T-mobile and AT&T, with absolutely no retail presence and carrier promotion really some will would like to get it. And, seriously, there’s practically no reason to purchase it, also if you are really geeky enough to care about stock Android and fast OS updates. 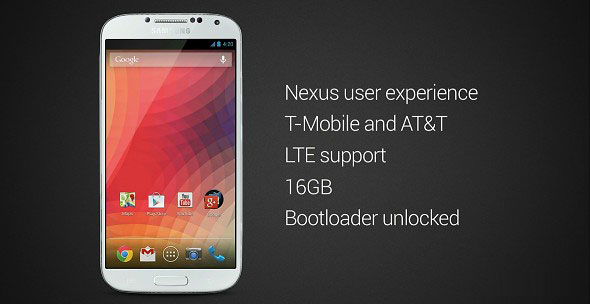 The Galaxy S4 Google Edition is available only in the U.S. via Google Play, and it will cost $649 for 16GB version and it will work on both the AT&T and T-Mobile US networks (LTE included). We don’t know whether there are some changes in specs. We suppose that at least the proprietary “smart” software features designed by Samsung will be gone along with TouchWiz. For now we’ve been able to only confirm the 16GB of built-in storage along with a microSD slot to expand those.

There are two processing solutions for the Samsung Galaxy S4. The I9500 model is powered by Samsung’s proprietary Exynos 5 Octa chispet with four Cortex A15 cores clocked at 1.6 GHz (which handle the tasks that require more processing power) and four Cortex A7 cores at 1.2 GHz (for improved battery life), plus a PowerVR SGX 544MP3 GPU that provides performance somewhere between the iPad 3 and the iPad 4. On the other hand the Galaxy S4 I9505 is underpinned by a Snadprgon 600 SoC from Qualcomm based on four Krait 300 cores clocked at 1.9 GHz and Adreno 320 GPU.