Samsung Galaxy S4 Getting the Lollipop update in Russia


Samsung Galaxy S4 has begun getting the Android 5.0.1 up-date in Russia. The actual update is rolling out for the Exynos version of the device (GT-I9500), and is also rather large at 1049MB. It appears that the up-date is so big that Samsung is going to be removing some pre-loaded applications like Google Play Books, Movies and more to make space. It’s probably just those applications that can be downloaded from the Play Store and Galaxy Apps will be removed, although this will not be used as a sign of the actual bloatware trimming that Samsung is choosing. 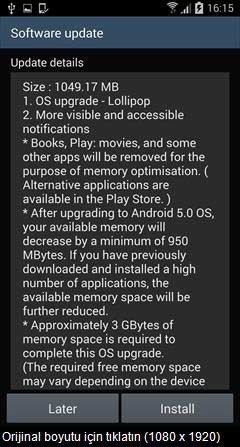 The update should bring all the features of Lollipop, like enhanced performance, lockscreen and heads-up notifications, and a redesigned interface, features that we exclusively previewed a couple of weeks ago. You should be seeing a notification for the OTA on your Galaxy S4. The update doesn’t seem to be showing up on Kies just yet, but it hopefully will as a computer would certainly come in handy for downloading all that data.