As we know the Galaxy S4 has launched several months ago by Samsung, and is now distributed almost all over the world. Samsung Galaxy S4 which has been circulated only have 2 colors: black and white.

Looking back, it was announced before galaxy s4, samsung galaxy s3 is present which got tremendous response from around the world. Galaxy S3 comes in 6 color choices (Pebble Blue, Marble White, Sapphire Black, Amber brown, titanium gray and garnet red). Is the Galaxy S4 will also bring a lot of color options? at least there is a news from Japan that says that samsung galaxy s4 has presented a blue color (Arctic blue)  in the NTT DoCoMo network. Arctic blue Galaxy S4 will be available next week. 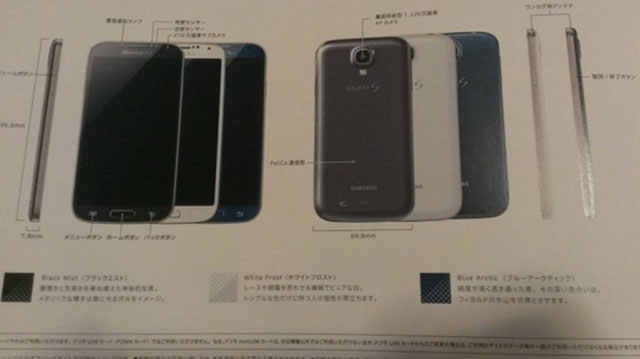 Arctic blue Galaxy S4 has the models and specs who same such as color black and white. As a fan of the Galaxy S4, of course this is a good news. When galaxy s3 have 6 color variant around the world, of course Galaxy S4 will be present also in a wide selection of attractive colors.